There is nothing more rewarding than getting a job, right? So people say, anyway, so I became a bartender at a local hotel.

On the second day of the job, as I was pulling a pint, I felt the strongest, sharpest pain I had ever felt in my entire life. I spilled beer on the costumers and all, it was a massive mess, I tell you!

That pain didn’t go away! It was sooooo bad and no position I tried to be in felt comfortable, just more and more pain. Well, what else could I have done? So I was brought to hospital. I had no idea what was going on with me, I thought it was appendicitis, but I was wrong… it was kidney stones.

My mother was there with me and I could see she was in pain from seeing me in pain. They tried three different types of painkillers and none made the pain go away, so they had to bring out the big guns: Morphine. Still I am not sure what I felt, but the pain went away almost instantaneously, but also my blood pressure, which dropped down to 73 by 31 (This is really, really low blood pressure). I am not sure what had happened, but I couldn’t speak and could barely understand what the people around me were saying.

Out of nowhere, I see a priest lean over me, puts his hands over my forehead and says something, which for me sounded like Charlie Brown’s teachers. As I couldn’t speak, I started struggling, well, I wanted to know what was happening! “Why the hell is a priest talking to me?”, I thought… maybe I should have just given up, really… at that stage, I thought I was dying and the priest came to give me my last rites. As quick as he appeared, he disappeared and, slowly, I became more alert and asked why the hell was he giving me my last rites? I heard a wave of laughter from the nurses and from my mom… I felt so embarrassed! It turned out that my mom was the priest’s hairdresser and he just came in to say hello.

Yeah… and that’s how you feel like a fool.

Published as part of Wordless Wednesday

Well, I probably don’t have much to say about this place… just that it is, today, the place I call home! It is good to have a place you can call home… I am so glad I have many! But Wexford is just special! I miss it a lot! Well, I just miss Ireland!

Two sunsets photos I took in Ireland, just a day apart. The beauty of the atlantic ocean, very close to where it meets the Irish Sea… Incredible! First photo in Kilmore Quay and the second near Hook Head Lighthouse (The oldest operational lighthouse in the world, over 800 years old!!!!!!!)

A little taste of home! Johnstown Castle is a beautiful example of the many amazing castles around Ireland! Cycling there for an afternoon picnic is one of the best way to spend the day! The castle has an amazing, well-maintained garden, really beautiful (today the castle is home to the Department of Agriculture, Food & the Marine) I miss the beauty of Ireland! 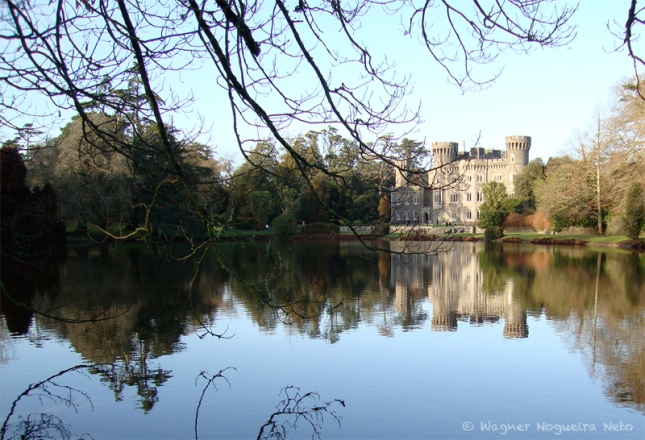 I can’t really pin down when I saw the Giant’s Causeway for the first time on TV, but I always wanted to visit it, but up to when I was 14 and still living in Brazil, I didn’t really know where it was. Well, to be honest, I didn’t really think about it very much. When I found out that I was going to move to Ireland, I started to research about the country and saw this beautiful place again, but it took me six years to visit it from the date I arrived. Well, it is that type of thing: “I can go whenever I want”, then you realize that 30 years have passed (exaggeration is just for effect, I am only 27…), you have visited the whole world, but the beauties just outside your house are taken for granted!

As my summary tells, I am a PhD student, but what it doesn’t is that I was born and raised in Brazil, educated in Ireland (when I spent my adolescence and most of my adult life), but had to move to the UK to pursue something bigger and better. Well, typical irish story, right? Ireland not doing so well, so move to the UK, why not? So this place, in particular (not where I used to live), speaks to me, mainly because of the song by Percy French, “Mountains of Mourne” (Don McLean’s interpretation, my favourite!). It tells the story of an irishman who moved to London and saw the wonders of the place, but was always longing for home. Doesn’t matter what London had to offer, he would rather be back “to the place where the dark Mourne sweeps down to sea”. Well, this pictures speaks way more than one thousand words. I miss Ireland.

Today, two years ago (my God! Time flies by!), I went to a trip with a couple of friends to the west of Ireland. The main purpose of the trip was to camp, climb and drink… it was a good trip! We were based in Ennistymon, Co. Clare. What a beautiful place! We were very close to the Cliffs of Moher, The Burren (where all the climbing was done) and a few restaurants that served the best crab claws in the world! Not exaggerating! It is some tasty stuff!

I snapped this shot from inside my friend’s house just before we left to head back home… not a bad sight to bring the trip to an end! An amazing sunset!

This picture was taken near Doolin, west of Ireland. I was on the way to the Cliffs of Moher with some friends. Not a macro lens, just a high resolution photo cropped… Sorry!